Graphic Novel of the Year 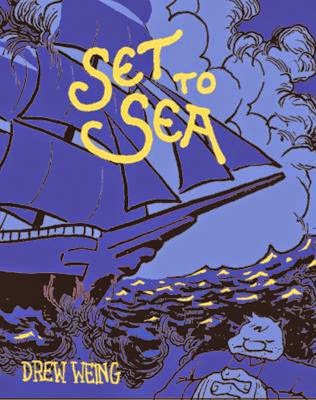 As a school librarian, a member of the American Library Association's Great Graphic Novels for Teens committee, a reviewer for Booklist and a lifetime lover of the form, a read a lot of graphic novels.  There are plenty of excellent Best Graphic Novels of the Year lists out there (why, here's one now), so I won't labor the point myself.  I just want to mention a single title, the best one I've read in 2010 and also among the best three or four I've read in my life.
Set to Sea by Drew Weing, besides being a loving tribute to my favorite sailor man (Popeye, of course), is insightful, melancholy and deeply wise.  A big, galoomphy fellow with dreams of being a poet is shanghaied aboard a rough and tumble vessel that sets to sea, where the unintentional sailor journeys through a lifetime of woes and joys, all in a cartoon style crosshatched with a depth that suggests the way the shadows of our past can cling to us  and help form what we become.  Lyrical and beautiful and somehow, over the course of 144 single-panel pages, communicating the sense of an entire life lived and the wisdom accumulated along the way, Set to Sea may be the worlds first example of a new genre: graphic poetry.
The best graphic novel of the year, at the very least.
Posted by Jesse at 4:33 PM 1 comment:

This time of year makes me think of Dr. Seuss.  With his penchant for delivering a message without being saccharine or didactic, he wrote the best Christmas story of all time.  As great as it is though, everyone's got their favorite Seuss and that's not quite mine.  While Green Eggs and Ham may hold my top spot for sentimental reasons (plus I can recite the whole thing cold after reading it to pre-kindergartners for eleven years running), my more intellectually-formed choice is the lesser-known, under-read I Had Trouble in Getting to Solla Sollew.  It's got a message, it's (I believe the term the Doctor himself would prefer is) "kooky," but underneath everything else is the classic Hero's Journey just as another doctor (Joseph Campbell) laid it out.  A nameless half person/half unidentifiable furry animal type finds life in the Valley of Vung becoming untenable, what with the dangerous terrain and the predators and all.  So, lured away by a camel-riding huckster, he sets out for the Utopian city of Solla Sollew, where they never have troubles (or at least very few).  As any reader will tell you, the journey is where the story lies, and -- without ever leaving Seussian territory -- the journey this guy undertakes is as harrowing, absurd and nightmarish as anything from Kafka to the Hunger Games.
The ending proves somewhat shocking for Seuss (and is pretty controversial among five- and six-year-olds, let me tell you), but it seems to me that a softer ending would have missed the point.  As usual, whether he was writing about Christmas or anything else, the Doctor got it just right.
Posted by Jesse at 12:50 PM 1 comment: So there I am, thinking about video games and it leads me, naturally enough, to ask myself, what was the best video game of my video game-playing lifetime?  Granting that I only dabble now and am not up on the firsthand experience of playing most of the contemporary stuff, I will say without any hesitation whatsoever that the best video game of my lifetime was Wasteland.  This was a role-playing game set in a post-apocalyptic future in which you play four Desert Rangers in the area in and around a devastated Las Vegas.  In 1988, when it first appeared, there were things in it I had never seen before, both content-wise (I believe it was the first game where you could ever engage a prostitute) and concept-wise (for my money, the segment where one of your characters has to enter the cybernetic brain of an enemy and combat him from within using logic and reasoning has yet to be beaten for pure suspense in a video game).  Particularly with the massive boom of sword-and-sorcery role-playing games at the time, just the idea of wielding machine guns and energy weapons to take on radiation-mutated rats instead of magic swords to take on goblins was revelatory enough.  The level of strategy was something new, as well.  One part required you to rescue a kidnapped politician and I eventually found success by posting a sniper at a skylight with one man covering him and having the rest of my party sneak in the back door.
Most of all what I remember was the feeling of isolation, the feeling that I was on my own out there and the missions I took were on behalf of such desperate people that when I would manage to only half-succeed (fairly common in the rather gloomy world of Wasteland), I was utterly devastated.  I'm not a particular fan of post-apocalyptic doom, but the closest I've ever come to recapturing that playing experience was in the Fallout series.  In any case, as obsolete as it might seem by today's standards, Wasteland left me with a sense of characters that fight on in the face of towering hopelessness that will stick with me forever.
Posted by Jesse at 10:58 AM 1 comment:

They tell me the novel I wrote is science fiction.  Nothing wrong with that, to be sure, though what I thought I was writing was horror.  Genre lines blur easily enough.  The movie Alien, for instance; is that more sci-fi or horror?  Well if you boil it down, you’ve got a monster stalking victims in an enclosed space.  That sounds like horror to me.  The Terminator, on the other hand (time-traveling robot tries to assassinate future savior of humanity before he’s born), sci-fi all the way.  Don’t even get me started on how Star Wars isn’t sci-fi at all, but fantasy.

Anyway, I tried to write a book about what scares me.  Monsters don’t, really.  Gruesome death is scary enough, but more shocking than frightening on the page.  The things just beneath the surface that we can't quite see, the hidden truths that guide our existence even though we're not even aware of them, now those are scary: that the world might actually be something completely different than you thought it was; that there’s something out there you don’t understand at all and it’s trying to hurt you and you don’t know why.  Those things scare me.
If that sounds a little obscure to you, check out two Twilight Zone episodes:  "And When the Sky Was Opened" and "Mirror Image."  Those are two fine, fine examples of what I mean.  Now, why do we like to scare ourselves to begin with?  That’s a whole different post.
Posted by Jesse at 11:12 AM 1 comment:

The Idea of Spider-Man

I saw Spider-Man: Turn Off the Dark last night.  Still in previews, still a work in progress, you've heard it all before, I'm sure.  It doesn't seem fair to review something before the artist(s) says it's complete -- God knows I wouldn't much appreciate somebody critiquing from over my shoulder while I was in the middle of writing a book (or even a blog, for that matter) -- so I'm holding my tongue with regards to the show itself.  But here's something it left me thinking about: just who does the idea of Spider-Man belong to now? 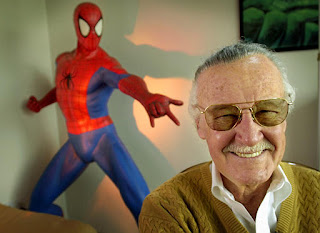 Nowhere in the playbill, nowhere on the signage, nowhere in the theater, were the names of Stan Lee and Steve Ditko credited.  These were, of course, the two gentlemen who created Spider-Man back in 1962.  Mr. Ditko's art does adorn some of the set and his name, as well as Mr. Lee's, is tossed off in the dialog at one point, and while that's certainly a pleasant tip of the hat, it's far from giving credit where it's due.  I understand that, technically, Marvel (and ultimately Disney) actually owns the character and that they're not obligated to mention the creators' names, not even in the comic books, but you'd think that someone so committed to the artist's vision as the show's director Julie Taymor would have pushed hard for something like this.
That's all dubious enough for an entire blog, if not an entire New York Times editorial, but that's not the quandary I mean to pose with my question about who Spider-Man belongs to.  What I mean is, once you create something like Spider-Man and release it to the world, and it's powerful enough that it lodges in the cultural consciousness, to what extent does it become the conceptual property of everyone?
Taymor and her co-writer Glen Berger have used a great deal of narrative shorthand in re-telling Spider-Man's origin, relying on the fact that the audience already knows the ins and outs of the mythology.  At the same time, they have infused the story with their own mythology, even as they dispense with aspects of the character that are central in other depictions.  Certainly it's a tribute to the power of a particular art that it can be effectively interpreted in a number of ways, that so many different worthwhile themes can be taken from it, while it still maintains its essential thrust.  But to what extent does such a widely reinterpreted idea still "belong" to the guy or guys who originally had it?  With universes like those built in Star Wars and Star Trek, which are subject to such a huge amount of fan "ownership," when does the original artist (as people like Stan Lee and George Lucas seem to have done) throw up his or her hands, say "go ahead, take the idea for a spin, see what you can do with it" and just let it go?
When something that sprang from your own mind undergoes such large scale re-shaping, does it always rankle a little bit or is widespread cultural acceptance the highest possible achievement for an idea?  That's what I've been wondering.
Posted by Jesse at 11:11 AM 1 comment: