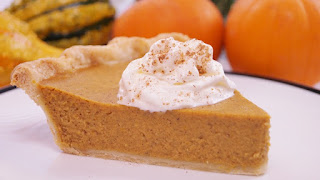 It's the same world it was last year, so there's plenty to be thankful for, and also plenty not to be.  As has become tradition here, though, these are a few small things that can make a day feel a little happier:

Person of Interest - The CBS television show is barreling towards its fifth (and probably final) season, but over the course of the previous four it has transformed from a gritty crime procedural about a reclusive genius and an ex-assassin turned vigilantes into an epic tale of a battle between two A.I. gods.  How it got from the one to the other, accumulating and losing engaging characters and exploring the deep moral ambiguity of surveillance along the way, is much of the fun.  In retrospect you can see how all the main beats were planned out from the beginning, thus providing Network TVs most satisfying and exciting story.

Spider-Woman by Dennis Hopeless and Javier Rodriguez - The highly entertaining story of a pregnant superhero, with the sharpest dialog and character work and the most inventive and energetic page compositions in mainstream comics.

The Great Forgetting by James Renner - A man returns to his hometown and stumbles into what may be the conspiracy to end all conspiracies, one that brings into question the very nature of memory.  If you enjoyed Those That Wake and What We Become you may find this a very worthwhile read.

Happy Thanksgiving.  Wherever the holiday takes you, don't show up without a good turkey joke.
Posted by Jesse at 9:01 AM 1 comment: 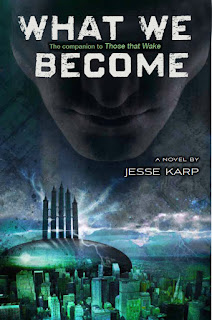 I've posted about the art of titling before and also about my own difficulties with it.  If popularity is the standard by which we judge these things, then I guess I did okay with What We Become.  It is also the title of the tenth collection of the Walking Dead comic series and a recent zombie movie.  Apparently the title goes well with zombies.  I wonder if anyone told Charles DuBos about that when he said "the important thing is this: to be able at any moment to sacrifice what we are for what we could become."  That, at any rate, is where I got the title from.
Posted by Jesse at 9:01 AM No comments:

So here's a dirty joke, but it's for a good cause: 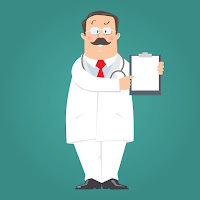 As many times as I've heard it and told it, this joke never fails to induce hilarity.  It makes excellent use of humor's secret weapon, the unexpected. But in this case, there seems to be something deeper going on.  There is another level of shock that is integral to this joke's effect and it relies on the same device as, say, the move the Sixth Sense.  At the end, you are given a piece of information that undermines everything you understood before.  It collapses the entire world you thought you were inhabiting and makes you realize that the story you were hearing was actually something completely different than you thought.  It's a powerful device, though one that has admittedly been clumsily employed and overused in the last ten to twenty years of popular storytelling.  But this joke seemed to me a particularly elegant and illustrative example of it.  In just four lines a world is built, collapsed and reconstructed to immediate and extreme emotional effect.  What more could you want from a story?
Posted by Jesse at 9:01 AM No comments: 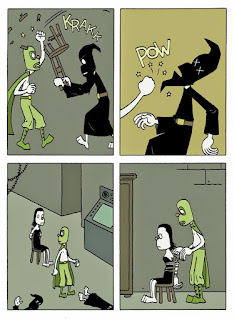 If You Steal, the latest collection of compellingly off-kilter stories from the Norwegian cartoonist Jason, contains two of the finest comics released this year.
The first is "Lorena Velazquez" a wordless tale of a costumed hero sneaking into a castle to rescue a captured woman from an impossible array of villains culled from the history of literature, comics, pulps and B-movies.  Jason illustrates in a minimalist style, inhabiting his panels with stoic anthropomorphic animals, all of which pays homage to the history of his art form at the same time that it gets under the form's skin and forces us to look clearly at the deep ironies inherent in its tropes and archetypes.  This story brings that dual homage/subversion to its delightful peak at the same time that it gently suggests that everyone needs help sometimes.
The second is "New Face," which rehashes the classic pulp chestnut of the falsely accused man on the run and the woman willing to help him.  In this instance, though, Jason subverts both genre and form with a virtuoso twist so powerful, it seems impossible that it has never been done before.  Just as the fugitive's situation reaches its climax, the story told by the words diverges from the story told by the art, each branch offering the opposing extremes of how the tale could have ended.  In this divergence, Jason demands that you consider which has primacy, the words or the art; a profound questioning of the essential unity at the heart of comics.
You can read an awful lot of comics in a year (in a decade, even) and only seldom will you come by an artist who incorporates an examination of the art itself into the entertainment.  That it's done as effectively as Jason does it here is more uncommon still.
Posted by Jesse at 9:01 AM No comments: