If you're writing a certain kind of story, a villain is a necessity, often as important to get right as the hero or heroine.  As a writer of those kinds of stories and a life-long reader of them, here is a list of villains arranged by their most basic, narrative elements.

The Villain You Are Meant to Hate - this is villain as pure antagonist, villain at its most basic level, constructed of negative characteristics like greed, intolerance or hatred, meant to help you root for the hero even more.  Ian Fleming wrote good villains of this kind.  They are plentiful in children's literature, too, as with -- to pull a really good one out of the air -- Miss Trunchbull in Roald Dahl's Matilda.

The Villain You Are Meant to Have Some Sympathy for - a villain who is clearly in the wrong, but whose motives a reader can understand and even identify with.  You still want them to lose, but the story takes on a grayer shade with this sort of villain.  Magneto from the X-Men comics and movies is such a villain.  He's done some pretty heinous things, but you understand that he is fighting desperately for the survival of his race.  You can damn his methods but not his motive.

The Villain You Are Meant to Hate but Learn to Have Sympathy for - this is a villain of the first kind who becomes a villain of the second kind, ideally taking the reader somewhat by surprise and giving the story an extra dramatic punch.  Darth Vader is a prime example of this kind of villain, but only if you watch the Star Wars movies as God intended, with episodes IV, V and VI coming first.  If you watch them the way Mr. Lucas intends, with episodes I, II and III  coming first, then you have a villain who doesn't start out as a villain, but becomes one over the course of the story.  This has interesting narrative possibilities to be sure, but the villain himself will eventually fall into one of the above categories once he becomes the villain.  Consequently,  I have not given this type its own heading.

For a while, I thought this was it, the basic three kinds of villains.  But I have slowly learned that there is another sort of villain, one who I believe is now my favorite kind.

The Villain You Cannot Understand - I do not mean by this a villain whose motives are mysterious and you don't really see where he or she is coming from.  That sort of villain eventually develops into one of the above three once his or her motives become clear.  I mean by this heading a villain who, for some reason, is beyond standard human ken.  While a writer might assign them human motives  (survival, hunger, domination), their psyches, as it were, are always alien and unreachable.  Villains who are machines are the most basic example of this, like HAL 9000 in 2001: A Space Odyssey or Proteus IV in Demon Seed.  More alien still are, for example, H.P. Lovecraft's Elder Gods.  Perhaps most disturbing of this kind, for the fact that he is so familiar to us on the surface, is Hannibal Lecter.

I find this last sort of villain the most purely terrifying and I tried to construct such an antagonist in Those That Wake, a villain who was, essentially, a metaphor given shape and form.  I am playing around with this idea for What We Become, trying to find something in the striations between these definitions.  My hope is that this villain, the Old Man, will be something terrifyingly beyond understanding, whose motives and psyche are still, somehow, disturbingly familiar.
Posted by Jesse at 9:01 AM No comments:

The Purpose of a Writer

Albert Camus, a linchpin of the Existentialist movement and author of -- among other things -- The Stranger, said
"the purpose of a writer is to keep civilization from destroying itself."
Artists in general can show us ourselves, our culture, our society in revelatory ways.  Writers tend to work in a medium that requires more of the audience than other art forms; more time, more consideration, more reflection.  I certainly believe in the potential of the writer to do these things, even the obligation.  With such a vast expansion of media and forums for expression since Camus's era, I wonder though just what affect that has had on the purpose of the writer.
Posted by Jesse at 9:01 AM 230 comments:

Another tease from What We Become, this one featuring a rather one-sided conversation between the antagonist of the story and a silent Mal.

"Minds are tools and I use those tools . . . to shape the world.  But you already know how minds affect the world, don't you, boy?"
Yes.  Mal knew that.
A moment passed as the monster breathed.
"There is a mind out in the city.  It is more powerful than any mind before.  I want it."
Posted by Jesse at 9:01 AM 5 comments: 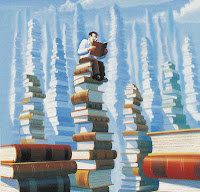 Reading reviews of your own work is a mixed bag, to say the least.  If you let yourself get carried away, even the good reviews can drive you crazy if you feel like something crucial was misinterpreted.  Sometimes, though, someone writes a review that makes you feel like she got exactly what you wanted her to out of the read.  I've learned not to pursue reviews of my stuff too closely, but this one came my way and I appreciated it so much, I couldn't help but link to it right here.
Posted by Jesse at 9:01 AM No comments: