The Weird That Got Away

I wrote a little while ago about how serving on the Eisner committee opened my eyes up to some of the sublime weirdness that independent comic world had to offer.  I must say that I was also pleasantly surprised by some of the deeply disturbing material (in the best way possible) that digital comics (a.k.a. webcomics) have to offer.  Some of that made it onto the nominee list (I'm thinking of Outfoxed and Sarah and the Seed here), but there are always a few that slip through the narrow spaces between votes.  So let me take this chance to recommend two others that particularly stood out:  The Abaddon (involved and cerebral, part two just got started) and Margot's Room (already complete, very dark; pay close attention to the opening words to figure out how to navigate through the comic).
It's always a pleasure to see some really effective weird out there, especially in new formats.  As Those That Wake will attest, I'm a big fan of weird.
Posted by Jesse at 10:29 PM No comments:

The Challenge of the Cabin (in the Woods)

Looking forward to the release of Joss Whedon and Drew Goddard's Cabin in the Woods with great anticipation, I came by this early review.  It seemed somewhat hyperbolic at the time, as Ms Johanson states, up in the first paragraph, "I don’t know how anyone can possibly make a horror movie again."  Having now seen the film myself, I am in fact not sure that Ms. Johnason has gone far enough.
I will not labor the issue of the film's metatextual commentary or the cleverness and engagement with which the story is told (an absolute necessity, I think, given its subtext; I mean, just how far can you go without alienating your audience?).  I will simply say this: the last fifteen minutes of the film encapsulates the most staggering, chutzpah-driven challenge conceivable to horror-movie makers, movie-makers in general, story-tellers of any variety and American culture itself.  "We have taken away all your tools, all your devices, all the things you have come to rely on,"  the film -- and its makers -- say, "now go do something new.  To not do so would be creatively bankrupt and irresponsible."
I'm very curious to see the response of other filmmakers and storytellers (I'm mulling over my own even now).  No doubt, many will ignore it and go on with business as usual.  A challenge of this scope is, to say the least, intimidating.  But those who choose to pick up the dialog Whedon and Godard have set in motion, what will they do? What is the next step? At this moment, I'm not even sure I can fathom it.
Posted by Jesse at 9:01 AM No comments:

I will be speaking on several panels to discuss topics such as trends in graphic novels for children and teens, comics in classrooms and evaluating comics for Comics, Libraries and Education: Literacy Without Limits.  The event is taking place at the Central Library of Rochester and Monroe County in Rochester, New York on Friday, April 27th from 8:00 am to 4:40 pm.  It includes a number of other excellent presenters and topics, all of which you can learn about here.
If you're anywhere in the area, please come have a look.  If you already believe in sequential art's potential in the area of education, you'll find a lot of new ideas.  If you're dubious of it, maybe we can convince you. 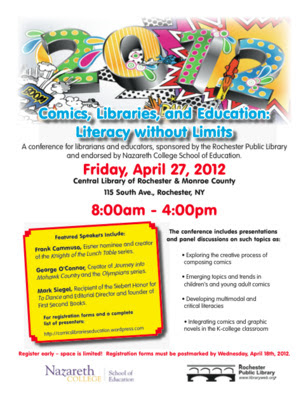 After an exultant (and bleary-eyed) four days locked in a conference room in San Diego with the five other judges and our esteemed Eisner Award administrator Jackie Estrada, nominations for excellence in comic books and graphic novels in twenty-seven categories have been officially announced here.
This was a unique and meaningful opportunity, a chance to offer a broad statement on the form itself and to become a small footnote in its grand history.    Among my own favorite titles on the list:

I'm confident you will find something on the list that you will love.
Posted by Jesse at 9:01 AM 2 comments: