As I watch my publisher design strategies (and participate in efforts myself) to get the name and sense of my book to the public, I come to wonder how we find the the books we read these days.  I don't mean when we know the book we want, how do we get it, but rather how do we discover new titles and new writers?  How do we find that astonishing read which comes from out of nowhere and brings unexpected joy with it? Advertisements in public places are generally reserved for authors who are already massively popular.  Browsing in bookstores is always fun, but you need a bookstore near you and the time to pick through the offerings.  Also, with corporate megaliths dominating the bookstore world, it's easy to feel as though your tastes are being guided to some extent by the prominence of book placement within the store and other below-the-conscious-level marketing techniques.  Amazon, though difficult to really browse through, has no shortage of offerings and they even recommend titles similar to ones they know you like.  On the other hand, this strategy can be somewhat limiting, and there's nothing quite like holding a book in your hand and flipping through it to see whether or not there's a connection.  There are websites for every taste (not unlike the one you're on right now), but you have to seek them out for the most part and they tend to concentrate within particular genres.
What I'm driving at here is a hope that books are still discovered by word of mouth, that a friend can sometimes drop something into your lap that you never would have come by yourself but suddenly and completely changes your reading life.  A friend noted a book to me the other day, based on the fact that it had the creepiest cover he had ever seen (click on the image above for a better look -- it's worth it).  I had a look and hunted down a copy for myself.  I haven't read it yet, but I'm very excited.  The creation of a story, at its best, is an incredibly personal experience that is meant to spark something similarly personal in readers.  It would be lovely to think that such a personal connection could travel all the way through the process.
Posted by Jesse at 1:18 PM No comments:

Earlier today, a colleague lamented to me what she saw as the dumbing down of culture.  It just so happens that I'm reading a book right now that is also extremely critical of what it sees as popular culture's downward spiral (Dark Dreams 2.0, an incredibly insightful look at what horror does for us and to us).  Taken together, it got me thinking: yes, there is definitely a lot of stupid stuff out there.  But among the most popular books out there right now is the Hunger Games Trilogy, which (say whatever else you like about it) tries to tackle some heavy, pertinent issues.  The best received movie of 2010 was the Social Network, which was as thoughtful an examination of a relevant topic as I've seen.  Perhaps what's going on here is a matter of massive proliferation.  With thousands of channels available, more reading choices open to us than at any point in history, not to mention the limitless offerings of the Internet, there's just so much more out there that we have access to than ever before.  Given that a good 95% of Human artistic endeavor is crappy to mediocre (and always has been), that remaining 5% -- which has also been growing and is more accessible to us -- just appears that much more inundated by the lousy stuff.
What's the point?  That things aren't as bad as they appear, or that things are, in fact, as bad as they appear but in a completely different way.  The good news, it seems to me, is that if we can just work hard to discern the good from the dumb, to wade through the bad to reach those precious gems of artistic achievement and intelligent consideration, there are as many out there as there used to be; more, even.  Paradoxically, it just takes a little more work to hear it over the static.
Posted by Jesse at 9:48 AM No comments:

The American Library Association's incomparable Great Graphic Novels for Teens committee (of which I am merely a single comparable eleventh) has officially compiled its list for 2011.  We also went through the torturous process of distilling our top ten choices from all of the incredible work that made it onto the larger list.  Keep in mind that, even though we're called the Great Graphic Novels for Teens committee, the books on the list are excellent reading for anyone who appreciates superior story-telling and art (for example, my personal favorite of the year -- if not ever -- Set to Sea, which I went on about a few weeks ago). 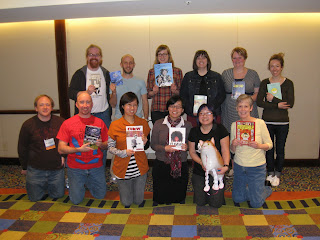 Some call it dark fantasy, others call it weird fiction.  Whatever you call it, it's a subtle sort of horror that emphasizes the weird, the eerie, the disconcerting over the out and out scary or grotesque.  You might say that classic horror works in the short term, but dark fantasy is geared more towards the long term cerebral chills that are harder to shake. 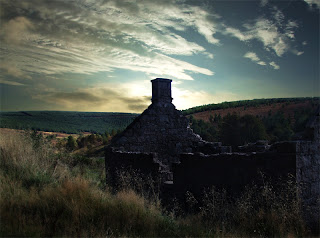 I tried to capture some of that dark fantasy quality in Those That Wake.  One of my favorite writers, Thomas Ligotti, may be the quintessential purveyor of it.  And while it's been a generally obscure pursuit since old H.P. Lovecraft was blazing its frontiers, there is now a brand new collection that puts it right out there for everyone to see.  The Year's Best Dark Fantasy & Horror 2010 (edited by Paula Guran) is the first annual collection devoted to this subgenre and though I haven't read it yet, judging by the authors involved, it looks to be high quality stuff.
An excellent way to start down a (dark, eerie) path less traveled.
Posted by Jesse at 11:06 AM 2 comments: