From Mount Sinai to Chestnut Hill

Churchie Comics/Bible-toons, which I collaborate on with creator and artist Rush Kress, has been featured in Philadelphia's Chestnut Hill Local.  Have a look right here.

The aforementioned Bible-toons #7: Song of Deborah, scripted by yours truly with art by Rush Kress, is now available here.

Storytelling, Corporate Agendas and the Fate of the Multiverse 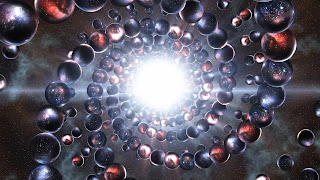 We invest a lot in stories.  They entertain us, sure, but they also help us shape ourselves and our understanding of the world.  If they’re the things we make ourselves out of, they ought to be made of good stuff.

Storytellers invest a lot in shaping those stories.  Yes, it’s a way to make a living, but the storytellers who really care know that they’re helping to build identities and worldviews, asking questions and offering possible answers.

Corporations invest a lot in stories.  They’re a crucial part of the package they label with the unease-inducing generic term “content.”  The better the stories are, the more people will watch them, so there’s a reason to make them good.  But for the corporations, the investment is mainly a financial one, the foundation of what Mike Hale of the New York Times referred to as the “narrative-industrial complex."

We’re in an age where a certain kind of story has taken over: the overarching, infinite serialized mythology.  For corporations, this is the best kind of product possible.  For storytellers, it’s got unique, exciting opportunities, but also dangerous, frustrating pitfalls.  For us, it’s potentially a whole new level of investment, for better and worse.

In Star Wars Episode VIII: The Last Jedi, Rian Johnson sent the Star Wars mythology spinning off its axis with a more idiosyncratic and personal tale that departed from the established lines of expectation, away those emotions already contained within the overstory.  This made fans queasy at first, buts seems to be widely lauded in retrospect.  Things happened in The Last Jedi that surprised us in a way that Star Wars movies hadn’t before.  Now admittedly, Johnson wasn’t working in a vacuum (so to speak).  Whatever he did ultimately required the approval of Disney and its arbiters, in this case, producer Kathleen Kennedy.  Now, maybe Kennedy saw the value of letting a young rebel go for a joyride, narratively-speaking, and how it could jump-start a kind of excitement and emotion that had been static.  Maybe she also knew that they still had an episode to go and any damage done could be rectified.

And, of course, the addendum to this is that J.J. Abrams “corrected” the narrative course in Star Wars Episode IX: The Rise of Skylwalker.  Feeling more beholden to what he saw as the overarching theme of the three trilogies, the overstory, he determined that certain expectations had to be met and that the themes of redemption and facing your dark side had to rise to the top of the tale.  Was he right?  The first trilogy was about a fall from grace, which you could say was a set up for redemption.  The second trilogy turned out to be about redemption (thanks, Return of the Jedi).  Seems like the third trilogy was really up for grabs in that regard and Abrams imposed his interpretation on it (along with the assistance of Disney and Kathleen Kennedy, perhaps).  Even had he not gone back and canceled out much of what Johnson introduced, he could still have played out those themes through the character of Kylo Ren and let Rey blaze a frontier into new, powerful thematic territory.  Abrams does strike one as a company man and he seems to have held the company line, here.

In Loki, meanwhile, creator Michael Waldron crafted a natural story for the title character that ultimately funneled into an unnatural place, as if his directions had been to tell whatever story he wanted, as long as it ended with certain very specific pieces in place.  Thematically-speaking, the ending Loki seemed to be driving toward was something on the order of have having a final, ultimate Loki variant revealed as the cosmic manipulator behind the Time Variance Authority.  The entire show was about Loki facing down and owning up to the various versions of himself, struggling with the false ambition of himself “on a throne.”  But when we finally get to the figure sitting atop the throne-iest throne of all time (literally), it turns out to be . . . some scientist from the 31st Century we’ve never seen or heard of before?  Yes, comic book readers know him and audiences will certainly get to know more of him and his machinations in the future (that’s the whole the point here), so Marvel is setting its ducks in a row very carefully.  But I do wonder if Waldron would have grown Loki’s narrative into that conclusion, had he been permitted to follow his storytelling instincts.

There’s a joy in a story that we know is going to keep coming, characters and world that we get to return to over and over and over again.  But sometimes, we need a story to end so we can fully understand it and use it to understand ourselves; so that it actually satisfies us instead of just leaves us wanting more.  What is a storyteller?  What do we expect from them and what do we need from them?  Surely more than just turning out "content."  What’s good for the product, is not always good for the story.  And good stories are good for us.

The Engaging Accelerated and Reluctant Readers with Comics webinar I participated in last week is now available on video.  It's free and streaming right here.

Engaging Accelerated and Reluctant Readers with Comics, a free webinar I am one of the panelists for, is next Thursday, February 25th at 7:00 PM (ET) and here is the registration.  Please join us!

I'm delighted to be joining a panel of experienced educators for a webinar on, as the title says, Engaging Accelerated and Reluctant Readers with Comics.  If you're an educator or librarian or are interested or invested in literacy education and comics, please join us on Thursday, February 25th at 7:00 PM (ET).  Registration is free and you can find it right here, along with a space to post questions for the panelists. 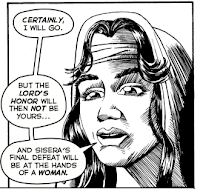 Bible-toons tells both famous and obscure stories from the Bible in comics form.  No proselytizing, no satirizing, just exciting stories with historical and thoughtful content and sharp visuals.  Headed by my Graphic Novels in Your School Library and Dr. Lollypop collaborator Rush Kress, Bible-toons is off to a smashing start with six issues ready to go.  Number seven will be my first scripted story for the line, "Song of Deborah," featuring the Old Testament's only female judge.  Whether you're interested in comics or the Bible or just a rousing story, have a look.