While Star Wars VIII: The Last Jedi seems to be eliciting a complicated reaction from Star Wars fans, among its sundry pleasures and occasional frustrations, I found a piece of wisdom that really resonated for me as a teacher.  Commenting on the relationship between teachers and students, a Jedi master of some note poignantly observes "We are what they move beyond.  That is the true burden of all masters."
If we did our job right, our students leave us far, far behind.  It gets you right in the heart sometimes, but how will the world get better unless the young come to understand more deeply and act more bravely than their mentors?

On Thanksgiving last year, the country was on the cusp of a momentous change.  Things have not particularly calmed down since then (do they ever, really?), and however you feel that change has paid off for the country, you'd have to agree that things have not exactly become easier or brighter.  But one of the ways we get through it is by finding things we're thankful for, too.  As on Thanksgivings' past, here are a few small things I'm thankful for, that offer sheer enjoyment, but also a deeper perspective on things we take for granted.

All the President's Men by Carl Benrstein and Bob Woodward - As an account of Watergate by the two journalists who broke the story, it's not exactly a light read, nor an escape from the real world.  Adapted into a riveting movie, the book illuminates just how much bigger the story was than the actual break in at the Democratic National Convention headquarters.  Most astonishing is just how deep President Nixon's rabbit hole of corruption went and the lengths he and his people would go to destroy their enemies, both real and imagined.  It happened in the 1970s, but it's still (or once again) a timely read and, ironically, a hopeful one.  Watergate, which felt every bit as cataclysmic as our own era's problems feel now, did change our country forever.  But if we survived that, maybe we can survive a lot more than we think we can.

Channel Zero: No End House - Comprising the second season of the SyFy Channel's anthology horror series overseen by off-beat horror writer Nick Antosca, this takes the frame of the creaky old scary story standby, the haunted house, and builds something new out of it.  A small group of college-agers are lured by urban myth and social media into a mysterious, intermittently appearing and disappearing house.  Braving its increasingly terrifying rooms, they find that the true danger comes after they leave . . . or think they have.  Creepy, weird and psychologically insightful, this draws its fear from its characters and their relationships and, in a growing pool of TV horror anthologies, puts Channel Zero as the top of the heap.

Cinemaps by Andrew DeGraff and A.D. Jameson - A follow up to DeGraff's Plotted: A Literary Atlas, which provides maps for and commentary on several literary works, this does the same for thirty-five different movies.  You could spend plenty of time pouring over the intricate maps themselves, especially in such clever forms as the multiple time-period representation for Back to the Future, but the perceptive essays that accompany the maps draw insightful new thematic elements out of well-trodden and often-analyzed classics (The Empire Strikes Back and Alien are two particular stand outs).

Have happy Thanksgiving and take a free, bonus turkey joke while you're at it. 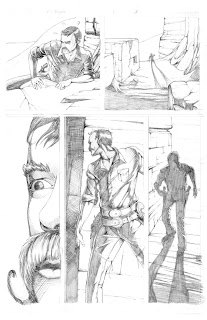 I'm collaborating with Rush Kress, my illustrator for Dr. Lollypop and Graphic Novels in Your School Library, on a new comic called El Bigote.  It's just getting started, but the elevator pitch goes like this: a cowboy has a showdown with a minotaur.  Click on the image for a larger view of Rush's detailed and atmospheric art.
Posted by Jesse at 9:01 AM 1 comment: 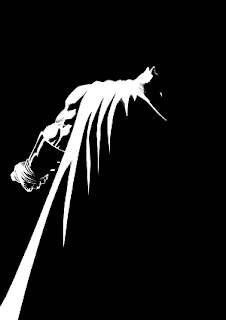 I have an extended and in-depth Spotlight review of Dark Knight: The Master Race by Frank Miller, Brian Azzarello and Andy Kubert in the new issue of Booklist.  Miller's classic Dark Knight Returns was one of the central books that drew comics into its darkest tones and times, so I approach the new book with the theme of hope in mind.  The full review is available here.
Posted by Jesse at 9:01 AM No comments:

School Library Journal recently published this article on the growing world of LGBTQ comics, written by my fellow Eisner judge, Brigid Alverson.  Filled with excellent information and insights, it also features a few thoughts from yours truly. 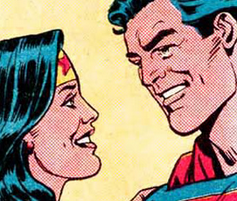 The new Wonder Woman movie is worthwhile in many, many ways.  I was particularly delighted by how it jettisons the contemporary (and badly overused) device of a snarky, irreverent tone and instead embraces an earnest (though not sappy) forthrightness that engenders a sense of hope and inspiration.
The scene where Diana makes her first dramatic appearance in full costume, emerging from a World War I trench to carve a path to freedom through the enemy line, is spectacular indeed, and as heroic as anyone could want.  It did, however, make me think of something.  In every superhero movie, the character's first heroic appearance always comes in the midst of battle, the hero leaping purposefully into a fight, dispatching enemies with skill and strength.  Every superhero movie, that is, except the original Superman.  In that movie, the character's heroic reveal is not in battle, but in the act of saving someone.
No further comment.
Posted by Jesse at 9:01 AM No comments:

A recent article in the New York Times covers an obscure but fascinating element of the city's history, one that my family has been closely involved with, as the story elucidates.  Those ancient, stony faces looking down on the city in judgment were, without a doubt, rumbling in my subconscious as I imagined the tone of the future New York for Those That Wake and What We Become.  Give the story a read right here. 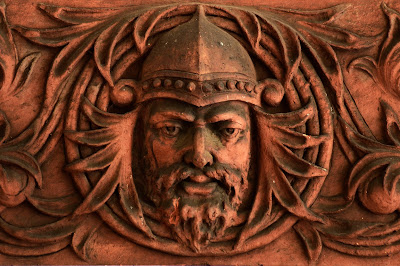 Labels: Art, Articles, Culture, Those That Wake, What We Become

While it probably doesn't pay to become obsessed by it, it's nice to check back in with the Internet every once in a while on the subject of books you've written.  This last time around, I found two interesting sites relating to Those That Wake.  The first, All the Tropes, is similar to another site I posted about a while back, in that it applies classic themes and concepts of storytelling to the book and offers the connections in a list that captures ideas about Those That Wake in a fun and interesting way.  The other one, Prezi, is a website on presentations that offers a review of Those That Wake in the form of an unusual and kind of spooky slideshow. 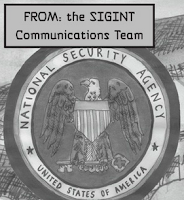 For their honors project, four students at LREI produced two interlocking webcomics.  One puts into comic form excerpts from actual National Security Agency documents, the other tells a story based on those excerpts.  Both feature sharp scripts and striking art, all supported by a polished and professional looking website (completely coded by one of the students).  Hopefully, the project will continue as an independent endeavor, but you can see the beginning of it at nsa-today.com.  Congratulations to Erika, Harry, Luke and Nicole on a superlative job.
Posted by Jesse at 9:01 AM 7 comments: 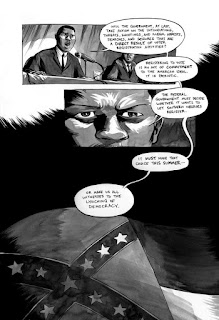 A slightly belated congratulations to March: Book Three, the final book in Senator John Lewis's autobiographical March trilogy.  In addition to the Coretta Scott King Award, March: Book Three also won the Printz Award, continuing the graphic novel format's strong history with this award (last year, This One Summer by Mariko and Jillian Tamaki took a Printz Honor and American Born Chinese by Gene Yang won the award in 2007).
This is on the heels of being the first graphic novel to win the National Book Award.  It maybe worth thinking about why a book with this particular political outlook should be accruing so much acclaim during this period of the country's political life.
Posted by Jesse at 9:01 AM 1 comment:

Along the road that led to this Inauguration Day, 2017, I recently reread two books that feel so impossibly relevant to current politics, it's difficult to believe they were both written more than a half a century ago: William Golding's Lord of the Flies and George Orwell's other fictional dystopian rumination, Animal Farm.

Whether today feels like a celebration to you or a tragedy, I recommend both of these books as a way to understand more deeply why and how this country has arrived where it is.