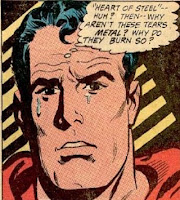 Seldom has a creation so founded on joy been rendered so joylessly as the superhero has in the movie Batman v Superman: Dawn of Justice.  While it has suffered a non-stop fusillade of critical slings and arrows, it still feels like the most troubling point hasn't been fully raised yet.  So calculatedly grim and brutal, no one is ever going to walk out of this movie -- certainly no children if, God help them, they were ever made to see it -- with a sense of hope or inspiration.
It's not that you can't use superheroes as a lens through which to view adult issues.  All you need to do is look at a few actual comic books to be assured of that and certainly Captain America: Winter Soldier balanced political issues with fun as the soon-to-be released Captain America: Civil War promises to do.  Indeed, Batman v Superman almost does it, by setting up an interesting question about the democratic deployment of power.  It then elects to literally blow it up, though, in favor of crushing violence and the imagery of superheroes breaking necks and gunning people down.
Ultimately, what superheroes are about is offering a sense of our best selves, they are meant to inspire us to reach higher, accomplish more in both individual and collective terms, and most poignantly, they were originally built to offer this sense of hope to kids.  Batman v Superman feels like it has fully turned it's back on hope and joy and left what is best and most worthwhile about the superhero miles behind.
Posted by Jesse at 9:01 AM