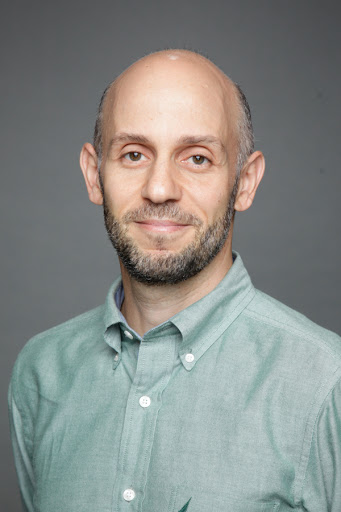 I was born in the borough of Manhattan in April, 1969.
I received a BA in Journalism (Media Criticism and Analysis) from New York University.
I received an MLIS from the School of Information and Library Sciences at Pratt Institute.
I have worked in my family's business, O.K. Harris Works of Art, and have reviewed movies for Review Magazine (now defunct, but not because of me).
I am a librarian at LREI (Little Red School House and Elisabeth Irwin High School), a progressive school in Greenwich Village, where I also teach the high school class Power and Responsibility: a Literary Approach to the Superhero.
I taught the graduate course Graphic Novel: Narrative and Sequence as a professor at Pratt Institute for four years.
I am a writer and reviewer for Booklist, the official magazine of the American Library Association.  Several of my articles are available on the Articles page.
I frequently speak on the history and analysis of comic books and graphic novels and their use in libraries and education.  I have done this for students, librarians, educators and those simply interested in the form at a range of venues, including Book Expo America, the Bank Street School, the New York Department of Education, New York Public Library, the Jewish Museum and the Metropolitan Museum of Art.  I have also been a panelist at Book Expo America.
I served on the American Library Association's Great Graphic Novels for Teens Award Committee from 2008 to 2012, the 2012 Eisner Awards committee and was the judge for the Graphic Literature category for the 2014 Oregon Book Awards.
I continue to write non-fiction, short stories and novels and still live in Manhattan with my wife Maren Berthelsen (producer of Yank! The Musical and co-founder of EmberArts) and our two daughters, Zoe and Verity.