Like last year and all the years before it, the world is a complex place, filled with big things to be thankful for and not.  As in posts past, though, here is a list of some small things that are worth feeling good about.

Broken Monsters by Lauren Beukes - A riveting police procedural involving one of the most bizarre homicides in literary memory alternates with the perspective of the lead detective's teenage daughter, whose own life is flying apart at the seams.  Written with both intensity and humor, Beukes creates a tone of deep uncertainty both by setting the story in the teetering city of Detroit and by suggesting a sense of the supernatural pushing in at the edges of reality.  This would be a great choice for fans of HBO's True Detective.

The Hole on DVD and Blu-Ray - An outstanding example of that seldom attempted hybrid: the family horror movie.  Joe Dante directs this story of the new kids in town who discover a hole in their basement that . . . well, the nature of the hole is part of the fun, but let's just say that it isn't where the hole leads that's the key, but rather where the hole leads you.  Hinging on a great, creepy idea and making sparing but effective use of scary images, this works for ages twelve through adult and turns out to be a movie that uses its chills to really explore its characters.

Rules of Summer by Shaun Tan - A haunting story told as a list of rules to help two brothers navigate the bizarre dangers of their summer vacation, this is anything but a simple picture book.  Both creepy and sweet, surreal and symbolic, the remarkable Tan creates an intricate link between his minimal words and his lush illustrations to create a narrative of surprising emotional depth and complexity.

Happy Thanksgiving and don't leave without your free turkey joke.
Posted by Jesse at 9:01 AM No comments:

A few weeks ago, I touched on some ideas about first person perspective (and why I'm not crazy about it).  A far less discussed element of writing is the tense.  Past tense is the natural default and the vast majority seem comfortable both reading it and writing in it, and I'm no exception.  Doing some recent writing, though, I started to explore its implications a little.
Whether consciously or unconsciously, when we read something in past tense, there is an underlying sense of security.  The story being told is already over, we just haven't finished reading about it yet, thus the world the story is a part of is still around and relatively intact.  If it's being told in first person, then the person telling the story is still alive (usually).  Perhaps the past tense lets us off the hook a little.  Their are certain stories and certain genres which might benefit from the very opposite, however.  Horror and thrillers, for instance, function primarily on a lack of security and using the present tense can be very effective at undercutting this foundation.  There are no shortage of examples in recent literature (The Hunger Games by Collins, 5th Wave by Yancey and Broken Monsters by Beukes to name just a few).  From the very beginning, there is something just a little bit ominous about them.
As a footnote, the horror writer H.P. Lovecraft was a master of subverting the security of the past tense story.  His narrators usually began with a dire warning about how their stories must be listened to, lest the world itself come crashing down. 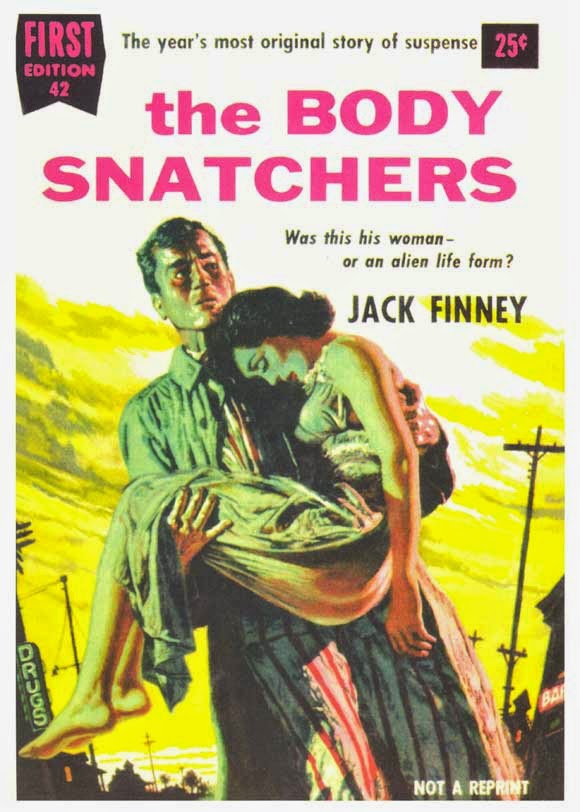 Poet, critic and professor Joshua Clover makes a fascinating supposition in his monograph on the movie The Matrix, for the British Film Institute's Modern Classics Series.  In a rather heady footnote, he suggests that the film Invasion of the Body Snatchers "is America's National Story, the one it remakes in times of crisis."  The original film, based on Jack Finney's book, was made in 1956 and remade in 1978, 1993 and 2007.  Clover sites the film's central thematic allure as being "the fantasy that one is the last free consciousness, as yet untainted by ideology, called to superhuman vigilance lest one be overtaken."  One might say that the human-duplicating pod people (the "body snatchers" of the title) represent a direct threat to what Americans hold most dear: individuality.
This is a fascinating theory and one could spend days coming up with alternate stories that might qualify as the prime narrative of America's collective psyche, not to mention stories that do the same for other cultures (Clover's throws out the story of the 47 Ronin as Japan's).  Beneath all this, though, is the compelling point that we use our art not simply as a means of expression but as a repository for our most essential ethos.
Posted by Jesse at 9:01 AM No comments: 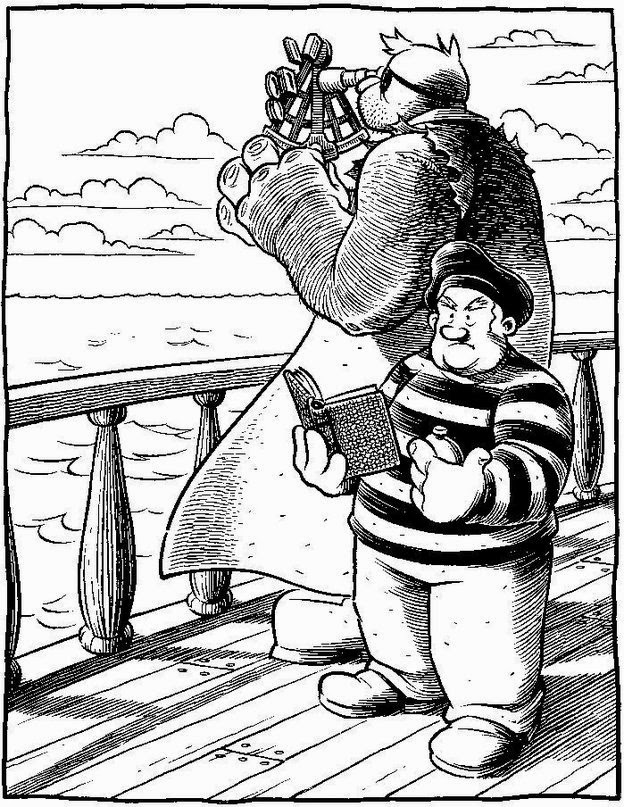 Among my very earliest posts, I devoted some space to the graphic novel Set to Sea by Drew Weing, which I hailed as the Graphic Novel of the Year (of 2010).  With several years to revisit it and reexamine it, I believe it may actually be the Greatest Graphic Novel of All Time (though Shaun Tan's The Arrival is a tough contender).
Publisher Fantagraphics has given it a new print run, and if you haven't seen it yet, don't hesitate (it's available right here).  Even if it doesn't resonate for you quite as deeply as it has for me, it is a compelling work of art and a quintessential piece of cartooning.
Posted by Jesse at 9:01 AM No comments: