The King in Yellow

Shared mythologies are narrative continuities created by one person and then used by many others, maybe over the course of decades or even centuries.  H.P. Lovecraft's Cthulhu Mythos is a prime example of this, as is the Wold Newton Universe (a family tree that establishes the genealogical connection between centuries' worth of literary heroes).  These mythologies are compelling and powerful because of the great sense of size and history they can evoke; creations that are larger than any single person (even their creators) that go on to have a life of their own.
The King in Yellow was a book of short stories written by Robert W. Chambers in the late 19th Century that center around a play (that goes by the same title) which, when read, tends to cause insanity in and chaos around the reader.  The king himself is a mysterious figure who never really appears and the snatches of play that Chambers included merely deepen the eeriness.  Since the stories were first published, they've inspired writers from Lovecraft to Thomas Ligotti with, if not direct storylines, then certainly a tone and scale of weirdness, and furnished many others writers with characters, details and ideas to flesh out their own tales.
HBO's True Detective is the latest and, perhaps, largest-scale entertainment to make use of this mythology and they are using it to excellent, unsettling effect so far.  It also makes for an excellent opportunity to revisit the original.
Posted by Jesse at 9:01 AM No comments:

I have students (from four-year-old to graduate) ask me all the time, as well as friends, seminar attendees and fellow comic appreciators, what my favorite piece of comic art is.  What they seem to mean is, not for craftsmanship or invention or draftsmanship, but for pure superhero-loving impact of image, what is the damned coolest piece of art I've seen in a comic.
Well, if we're talking about artists overall, I have to go with the great John Romita, Sr., who brought a sense of clean action and clarity of narrative like no one else, mainly through his work on Amazing Spider-Man.  But as a single image, it's got to be this one by George Perez, the cover of JLA/Avengers 4: 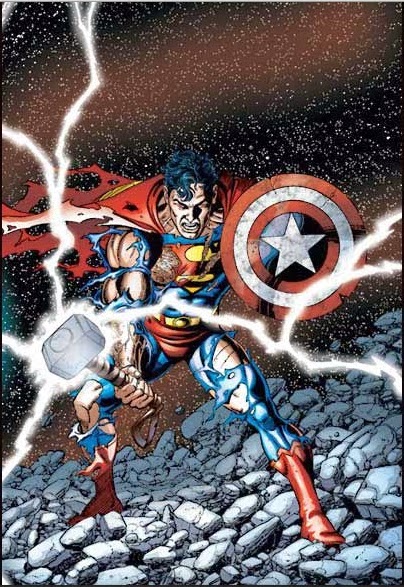 Hopefully, this image speaks for itself.

In the February 4, 2014 issue of the New York Times, David Brooks wrote about technology and people in a particularly illuminating way.  Recognizing that there are things that machines can and can't do and that there are things humans can and can't do and, most importantly, there is no stopping technological progress (even if you wanted to), Mr. Brooks discusses what human traits are becoming increasingly important in a cultural delineated by technology.  Have a look for yourself right here.

Somewhat apropos to the thoughts from last week's post, Robert Louis Stevenson, writer of -- among other things -- Treasure Island and The Strange Case of Dr. Jekyll and Mr. Hyde, had this to say: "And yours is not the less noble because no drum beats before you when you go out to your daily battlefields, and no crowds shout your coming when you return from your daily victory and defeat."
Everyone needs a little bit of heroism to make it through the day, sometimes, and all the more so to make the world work in little ways.  This sort of heroism is often invisible, something I'm reminded of frequently, as I work with teachers and watch them struggle toward their daily victories (and defeats).