Ode to a Former Starship Captain 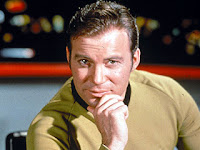 William Shatner is currently performing his one man show Shatner's World: We Just Live In It on Broadway.  It's always a risky prospect going to see or meet someone you have deep admiration for, but I went ahead and did it (with the moral support of some fellow admirers) and I'm pleased to say that it was quite charming overall.  He went over his history as a performer, told some anecdotes, told some (often funny) jokes, showed some well-chosen clips and did not overplay the "Shatner persona."
In the end, what I found most gratifying about the evening was the chance to stand up and applaud.  I was, of course, one person in a huge room of standing, applauding people.  Mr. Shatner didn't see me as anything more than a face in a massive crowd.  However, on a personal level, it was shockingly affecting to be able to say thank you in this way.  I mean, this is a guy who had a profound effect on my life, a guy who (as Captain Kirk) helped me define what it actually meant to be a man, what it meant to stand up for for what's right and stand up to what's wrong.
How often do you get the opportunity to actually thank your childhood hero?
Posted by Jesse at 9:01 AM No comments: 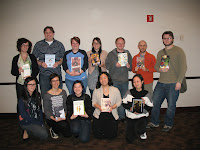 ALA's Great Graphic Novels for Teens Committee met in Dallas and compiled a strong list of graphic novels for use in libraries (and for reading enjoyment, too, of course).  We also put together a top ten list from the fifty-six titles.
This was my last round on the committee, sorry to say, as they were three years very well spent.  Now, on to the Eisners.
Posted by Jesse at 9:01 AM No comments:

If Language Could Kill

Recently released is The Flame Alphabet by Ben Marcus, about a world in which the language of children -- the simple act of their speaking -- begins to kill their parents.  The idea of language having a deadly physical affect on people is a great one, ripe with all sorts of possibility.  Mr. Marcus tells his own compelling story about it, but here are three other books with a similar concept at their hearts.

Pontypool Changes Everything by Tony Burgess - a virus transmitted through conversation turns the infected into rampaging killers.  There was also a movie based on this one.

Lullaby by Chuck Palahniuk - a children's lullaby, when recited, can channel a targeted psychic deathblow.

The Man Who Collected Machen by Mark Samuels -  a book of weird tales featuring several stories of toxic language, including one called "THYXXOLQU," in which gibberish begins to take over all written words.
Posted by Jesse at 9:01 AM No comments:

It is eminently understandable that people would be quicker (and generally more enthusiastic) to review a novel like Those That Wake than to review a relatively small trade publication like Graphic Novels in Your School Library.  However, the first one has come in from the Midwest Book Review and it reads, in part "Graphic Novels in Your School Library is an excellent and practical start to helping even those who have no idea [where] to begin with these works."
Posted by Jesse at 9:01 AM No comments: