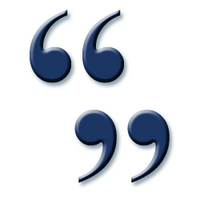 With only about two months to go before its release, here is another bit from What We Become.  This is a part of an exchange in progress between Mal and a new character named Rose.

"How do you know all this?" Rose asked.
"It was all over newsblogs and the HD," Mal replied.
"I never heard about it."
"You just forgot," he said.  "Everyone did."
"How?  How could people forget something like that?"
"Some things we forget because they fade from memory.  Other things we make ourselves forget, because we're scared of them.  Or ashamed."

Some things are too horrible to look in the face.  Sometimes you can't move on.  Sometimes all you can do is keep going.  What can you reasonably hope for that community, for those people, but that they are able to keep going until their lives once again have some meaning beyond being able to live through the pain?
Posted by Jesse at 9:01 AM 1 comment: 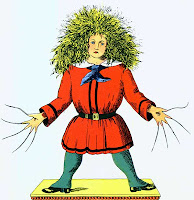 Looking back over your life, you can turn up all sorts of things that contributed to your sense of weird.  As weirdness is often on my mind, I look back over the weird in my history and from time to time am delighted with what I rediscover there.  Two such things I dusted off and enjoyed recently were Doom Patrol and Nowhere Man.
Doom Patrol is a team of odd superheroes dating back to the Silver Age, but, as re-conceived by Grant Morrison, the oddness was ratcheted to a whole new level. If you're familiar with Morrison's recent work on Batman, or his superlative writing on JLA and All-Star Superman or the current run of Action Comics, you might be surprised that he made his name on hard-edged stories that flirted with the surreal, as in the Invisibles.  The first of collection Morrison's Doom Patrol stories, Climbing from the Wreckage, puts the heroes and their semi-nefarious boss Niles Caulder, up against the Scissormen, guardians of a world born from a parasitic book (and incidentally adapted from the psyche-scarring children's book Struwwelpeter).
Nowhere Man was a television series that lasted a single season, starring Bruce Greenwood as Thomas Veil, a photojournalist who returns home one night to find that his wife, his friends, his colleagues do not recognize him.  His entire life has, in fact, been erased by an organization that wants the film negative of a single image from him.  Like classically weird British sereies the Prisoner, Nowhere Man chronicled Veil's weekly run-ins with the organization and the plots they threw up against him.  Unlike most of those series that are cancelled after one season, Nowhere Man actually had provided a full-on explanation and a good sense of closure in its final episode.
Some vintage weirdness for those on the lookout.

MacDonald and His Archer 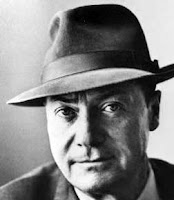 Ross MacDonald's mysteries, and his main protagonist Lew Archer, occupy a crucial place in literary history.  These stories are the essential link between the tough-guy private eye stories of Dashiell Hammett and Raymond Chandler, which built the genre, and contemporary private eye fiction, with darker, more troubled and psychologically raw characters like James Lee Burke's DaveRobicheaux and Lawrence Block's Matt Scudder (to name two of my favorites).  MacDonald's Archer was often plunged into such cases involving the misdoings of the wealthy and influential and the ways that families could destroy themselves.  Archer was definitely a tough guy like his antecedents, but he was also the first of the bunch to start down a path filled with looming shadows of psychic doom and devastation that deepened and darkened the genre overall.  The Doomsters and the Galton Case are good places to dive into Archer's adventures, as they represented the ratcheting up of psychological intensity in the series.  You might also catch PaulNewman's interpretation of the character, renamed Harper for some reason, in two movies based on Mr. MacDonald's books, namely Harper and the Drowning Pool.
Reading through these books has put me in the mind of writing a mystery and how an author might bring this noirish sense into a YA setting most effectively and believably.  One signpost in this direction is the movie Brick, in which a high school student looks into the death of his girlfriend, and it comes complete with a hard-boiled voice-over.  Somewhere down the line, I'm going to take a stroll down the path that Mr. MacDonald blazed so compellingly.