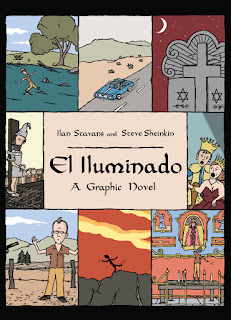 Steve Sheinkin, erstwhile creator of the wise and hilarious Rabbi Harvey series, has collaborated with Ilan Stavans, Professor of Latin American and Latino Culture at Amherst College, to produce El Iluminado, a graphic novel distinctive in both subject matter and aesthetic.  Chronicling Professor Stavans's (fictional) visit to Santa Fe New Mexico, where he gets caught up in a hunt for secret documents that are tied into the history of the Crypto-Jews.  The Crypto-Jews were a (not fictional) group of Jews who were forced to convert to Catholicism in Spain circa 1492.  Many of these Jews went through the process of conversion but continued to practice their own religion and handed down their traditions to their posterity.  Many people of Latin American descent, it seems, may have a significant Jewish heritage and not even know it.
The story of the Crypto-Jews winds its way through the story of Stavans's quest, plagued with betrayals, hidden messages and religious controversy enough to rival the DaVinci Code.  Sheinkin's art puts a unique twist on the tale, with its charmingly exaggerated figures and evocative sense of place, and makes the history (as well as the mystery) breathe with a sense of warmth and life.  A fascinating, funny and often-thrilling story. 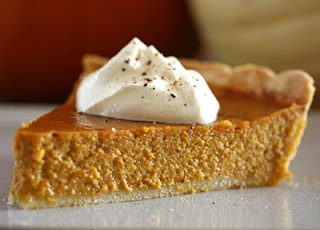 As Thanksgiving seems like the right time for traditions, with this second post on the subject, I hereby create a yearly tradition of listing a few things I'm thankful for.  As was the case last time, this is not meant to delve into the really big stuff -- family, friends, opportunities -- but rather to offer a few suggestions based on the art and entertainment that is enlightening or enthralling me around now.  Nevertheless, given the position many people in my corner of the world are in at the moment, it seems criminally frivolous not to mention how thankful I am to have a roof over my head, a hot meal on the way and a healthy family to share it with.  There are many ways to assist those who are not so fortunate.  If you are of a mind to help, here is one of many spots you can look at for ways to do so.
In the meantime, here is a short list of things you might have a look at in between assisting with the debris clearance or donating to Red Cross and settling in for the Turkey.

Hard Times on DVD - Set in the 1930s but made in the 1970s, when they really knew how to shoot a fight scene, this is the story of an itinerant bare-knuckle boxer and his stopover in New Orleans.  Starring cinema's toughest tough guy, Charles Bronson (as well as a charming James Coburn) it is both tough-as-nails and yet also curiously melancholy and heartfelt.  And incidentally, the character of Mal from Those That Wake and What We Become, owes more than just a little bit to Bronson's character Chaney.  In fact, I always imagined Mal's father Max (brief though his part was), as more or less being that guy.

Mind MGMT by Matt Kindt - A writer searching for the reason why an entire plane full of people have lost their memories makes it a great mystery.  A secret organization of spies hunting down their greatest agent, who has gone rogue, makes it a cracking espionage tale.  That the spies are all psychics, each with a unique skill, makes it a thrilling and exciting Sci-Fi yarn.  Kindt's graphic story-telling skills, breathless pacing, sharp ideas and highly distinctive and engagingly idiosyncratic art makes it a great comic book.  Not just great, in fact, but with loads of bonus materials in each monthly issue that will not appear in the collected edition, it may be the single best value for your comic book dollar out there.

The Mysterious Benedict Society by Trenton Lee Stewart - Four children must complete a series of difficult tests before embarking on a secret mission to a bizarre boarding school.  I haven't even started this yet, but it sure sounds good and, because it was highly recommended by my nine-year-old daughter, I can't wait to get going.

Happy Thanksgiving.  Make sure you bring a good turkey joke to the table.
Posted by Jesse at 9:01 AM 1 comment:

Labels: Books, Movies, Those That Wake, What We Become

Those That Wake took its title from (and was preceded by) a quote from a poem by the English diplomat and poet Matthew Prior.   It is a quote intended -- out of context as it is -- to sound somewhat menacing.  In context (an excerpt of which appears to the left of this very post), it goes like this:

When all seems lost and tomorrow feels like a long journey ahead
It is hope that sparkles like a flickering flame inside of our hearts.
For you have a destination far beyond where you stand today,
And hope is but a dream of those that wake.

Clearly, my ultimate intent by using this quote (and in writing the book itself), was to suggest a sense of hope.
What We Become, the sequel to Those That Wake, takes its title from (and is preceded by) a quote from French critic and essayist Charles Du Bos.  Also intended to conjure an uneasy feeling, excerpted as it is, in its entirety it reads "the important thing is this: to be able at any moment to sacrifice what we are for what we could become."  Again, my ultimate goal (with the quote and the book) is to suggest the idea of improvement, of becoming something better than we are, though the evolution might require that we give up a certain part of ourselves.  Conveniently, it also conjures the notion of sacrifice, a theme that plays heavily into What We Become.
Posted by Jesse at 9:01 AM 1 comment:

Labels: Quotes, Tease, Those That Wake, What We Become

Ode to an Unliklely Favorite 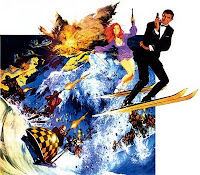 With Skyfall about to catapult the world's greatest spy back into tuxedoed glory for the twenty-third (official) time, one casts a glance back at the fifty-year history of the franchise.  I will, to my dying breath, defend Connery as the quintessential Bond, the Bond from which all other greatness sprang.  He is simply magnetic, burning with charisma and a casual menace that defined the character, the franchise, the action genre and left an indelible stamp of the collective imagination forever.  But looking back at his Bond movies, it is fascinating to see how they are a tribute to a sort of epic story-telling that belonged to a different era.  Their primary presentation of spectacle, their main mode of thrilling audiences, was to show them exotic things: a laser beam! People fighting underwater!  The Bahamas!
When you get right down to it, it is George Lazenby's single and often-reviled Bond movie On Her Majesty's Secret Service that holds up the best from that era, if not the entire franchise.  The film proves to have an unusally strong script and great craft behind it with an engaging plot, highly enjoyable supporting performances (by Telly Savalas and Diana Rigg), an unusual emotionally-charged story for Bond, bruising fights (particularly the climactic hand-to-hand match with Blofeld on the toboggan) and tense suspense set pieces (Bond's escape from the cable car engine room is great).  It is, in many ways, the most modern of the films and simply the most exciting, from both an action standpoint and a character standpoint, though I grant that Casino Royale and -- from advanced word Skyfall -- could give it a run for its money on that count.  And, just for good measure, it has a fantastic score, including its wordless title song.
For the next Bond film, we can discuss how Timothy Dalton's interpretation of Bond was far ahead of its time and blazed the trail that Daniel Craig is currently negotiating so successfully.
Posted by Jesse at 9:01 AM 1 comment: