This Is How You Save a Library 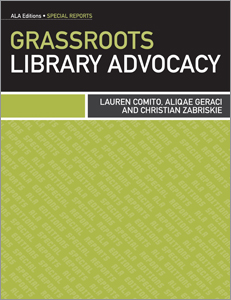 Keeping libraries opened in this day and age seems like it could be a full time job unto itself.  Unfortunately, most librarians already have a job, keeping those same libraries running and giving their communities the invaluable support they are uniquely equipped to offer.  So, in their spare time, how do they organize events to help fund and support their libraries, how do they rally volunteers, how do they bring community and media attention to their cause?
Well, take it from some people who have done exactly those things and successfully saved libraries from having to close their doors permanently with swift thinking, sharp strategies and loud voices.  Grassroots Library Advocacy by Christian Zabriskie, Lauren Comito and Alliqae Geraci is the most valuable resource you could possibly have on this subject, especially if you're working with severely limited resources, which, at this point, is practically every library in the country.  Learn more right here.
Then get out there and save a library or two.
Posted by Jesse at 9:01 AM No comments: 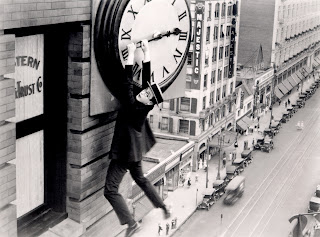 The scene at the right, from Safety Last! starring Harold Lloyd, is one of the most famous in movie history.  While you might be quite familiar with it, perhaps you don't know that the entire last twenty minutes of the movie is just as astonishing.  Mr. Lloyd, one of silent cinema's three widely acknowledged geniuses (Charlie Chaplin and Buster Keaton being the other two) climbs a twelve story building from ground to roof, the famous moment with the clock just a brief interlude in a much larger spectacle.
Having just seen the movie in a theater recently, I was amazed by Lloyd's ability to craft a sequence that was simultaneously hilarious and thrilling, an art that contemporary movies seem to have abandoned.  I have never been to a movie in which the audience was so audibly caught up in the suspense, gasping and groaning and shrieking at each development.  Heightening the thrills was the fact that, not only a person actually making that climb (no CGI back then), but that it was Harold Lloyd doing it.  Both the climber and the street many floors below are clearly visible in nearly every shot, many of them close ups on Lloyd's bespectacled face.  This is basically the equivalent of watching George Clooney or Meryl Streep or Robert Downey, Jr. actually scaling the side of a building.
Though Lloyd has had homages aplenty (Scorcese's recent Hugo, for instance, or practically every movie Jackie Chan ever made), it's tempting to say that they don't make 'em like they used to.  As I dwell on it, though, I'm not sure they ever really made them quite like that.  Safety Last! is one of a kind.
Posted by Jesse at 9:01 AM No comments:

How Sweet It Isn't Perhaps it is fairly common knowledge that obesity, diabetes and heart disease are on the rise in this country.  Perhaps it is also common knowledge that one of the leading causes of this is sugar consumption.  What I didn't know until recently is that about 80% of commercially-produced foods contain sugar or its latter-day replacement high fructose corn syrup.  We love sweet stuff and the sweeter stuff is, the more we buy and eat it.  So why do we love sweet stuff so much?
As with just about everything else to do with our physical proclivities, the love of sugar is in our genes.  We are encoded to love sugar because there is no (and has never been) an acutely poisonous food on the planet that is sweet.  Essentially, we are evolved to feel that when a food is sweet, it's safe to eat.  This, of course, comes from millenia past, when you couldn't possibly eat enough sugar to make you overweight (since it was only really available in fruit).
So what's happened here is that corporations that produce food have tumbled to this genetic fact and now make things sweeter because they know we'll want more of them.  They are using our instinct for safety against us, to feed us something that is increasingly dangerous.
You can learn a great deal more from Robert Lustig, an expert on this subject, who gives a fascinating interview about it here.  Learn more about the dangers of high fructose corn syrup and other corn-derived products in a highly engaging graphic presentation available here and created by www.LearnStuff.com.
Posted by Jesse at 9:01 AM 2 comments:

A Dog Has His Day 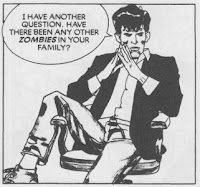 The most popular comic in Italy appears to be a the story of "nightmare investigator" Dylan Dog created by Tiziano Sclavi.  Each graphic novel-length issue tells a complete tale of one of Dylan Dog's investigations into all manner of horrific things, both supernatural and not (many stories cleave more to the psychological thriller end of the spectrum).  What makes these stories such stand-outs is their ability to add humor into the mix without diluting the horror or the surprising emotional punch most of the tales pack.  Their most distinctly non-American trait is their tendency to find horror in unexpected, often surreal, places, or to find a new twist on classic horror tropes.  Thus far, the only stories translated into English are to be found in Dark Horse's The Dylan Dog Case Files.  Therein,  an eerie tone and stark terror are both to be found among a deaf and mute who has had the lower half of his body amputated, a man who has been so universally ignored that he turns invisible, a woman awaiting the return of the "monster" who killed her entire family years earlier, a woman who can't tell whether or not she's dreaming, Dylan Dog himself getting locked out of his apartment for an entire night, and the search for a deadly rural landscape secretly hidden in the middle of urban London.
A recent movie based on the character was reviled by critics, but the comics themselves are unique and thrilling.
Posted by Jesse at 9:00 AM 1 comment: