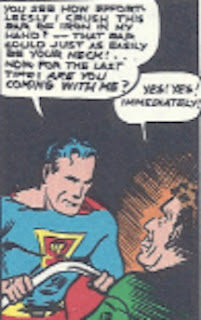 The Superman who first appeared in June, 1938 was a good guy of a very different sort than the smiling boyscout that his name conjures these days.  He was a mighty engine of social justice who took on lynch mobs, wife beaters and corrupt industrialists, and he was none too gentle about it either, as evidenced in the panel to the right.
In the recently relaunched Action Comics, writer Grant Morrison, ably abetted by the vigorous and muscular art of Rags Morales, has truly brought the character back to his roots.  In a world where a property is supposed to be comfortably familiar across various media, and with a new Superman movie due out next summer, it's something of a kick in the pants to see a Superman who, in genuinely crusading once again for the underprivileged and finding once again a sense of social indignation, proves daringly progressive.  It is, dare it be said, a little bit subversive, and serves as a reminder that when the superhero was born, his first archenemy was The Man.  And even if you don't care for a touch of the edgy in your superheroes, it's still a thrilling read.
Posted by Jesse at 9:01 AM