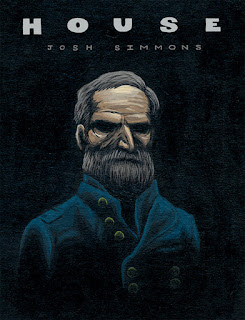 Josh Simmons is an indie comics creator whose latest is called The Furry Trap.  It is a collection of short comic stories that experiment with the notion of horror.  Some of the tales are weird and skewed versions of familiar narrative ideas, others offer more subtle twists on horror standards.  They are not all dead-center horror, but they are, across the board, incredibly disturbing, thanks in great part to some truly hideous sexual violence (perpetrated against men, women, mutants and evil sorcerers).  While it is not done frivolously and has a very intentional narrative effect, it may still be more than most can comfortably take.  The best is the final story, Demonwood, which is the nost starkly terrifying of the bunch, but leaves the graphic depictions off-panel.
Less extreme but weirder still is Jessica Farm, the story of a young woman waking up on Christmas morning, who must navigate the various semi-surreal joys and monstrosities that occupy her house.  Told in a very David Lynchian vein, this is merely the first volume of a grand decades-spanning experiment on Simmons' part.
His masterpiece, however, is a work called House.  Accessible without sacrificing sublime strangeness or creepy uneasiness, it is a tale not so much of a haunted house but of an evil house.  Told silently and in black and white, Simmons' use of panel size, narrative build up and deployment of inky darkness is nothing less than masterful.  Even as the visuals make daring and unique use of the format, Simmons' grip on horror tropes and his ability to reforge them makes for a scary story both traditional and surprising.
Posted by Jesse at 9:01 AM