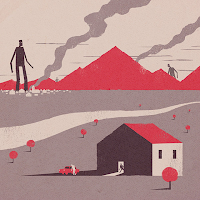 Luke Pearson is an English comic author and artist whose work has made its way over here slowly but surely.  In his lone work for adults, Everything We Miss, he shows us the slow and harsh dissolution of a relationship between a young man and woman, even as he makes us privy to the world that exists just outside their sight and knowledge.  As they argue fiercely in their kitchen, just out of their peripheral vision are weird little spider-like creatures that silently observe the unfolding drama of humanity.  As the man drives forlornly down a dark country road, he just misses a pine tree uproot itself and dance.  Neither of them see the dark figure that lowers itself down and twist ethereal fingers around the man's tongue and jaw, controlling his every word.  This is a surreal world that is both disturbingly eerie and deeply emotional.
Mr. Pearson, somewhat miraculously, brings this same sense of the eerie life that exists outside our normal perceptions, to a series for children featuring one of the great, plucky, big-hearted heroines of all time.  Hilda has the uncanny ability to befriend anyone, whether it's a giant as tall as a mountain who appears only at midnight, or a talking bird who has forgotten how to fly.  Her adventures take her wandering through a countryside populated by miniature, invisible elves who want to get rid of her (as in Hilda and the Midnight Giant) and through a painstakingly designed and unbelievably evocative city where the denizens prepare for their annual parade to honor a great, God-like raven (as in Hilda and the Bird Parade).  Hilda herself, who first appeared in Mr. Pearson's Hildafolk, is an irresistible character, with a bottomless sense of adventure and a natural instinct for empathy and friendship.
Mr. Pearson's gentle cartoonish characters and meticulously conceived environments create melancholy worlds filled with mysterious nooks and crannies that manage to work beautifully in stories for both adults and children.  This is a rare gift and, as he branches out into things like the short piece he has in First Second's upcoming Fairy Tale Comics, hopefully we will be seeing a great deal more of his imagination on display.
Posted by Jesse at 9:01 AM