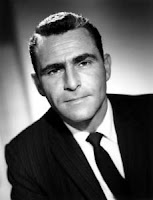 In addition to having a hand in two of the scariest things I've ever seen, Rod Serling -- creator of the Twilight Zone, among many other accomplishments -- said "too often a man will become clever without becoming wise."
We are a young culture and are fascinated by the clever, while actual wisdom is, by its nature, somewhat less seductive.  It's relatively easy to acquire knowledge.  Learning how to employ that knowledge responsibly and beneficially, and let it expand our perspective and understanding, is damned hard.  Laura, a character in What We Become, more or less says this, but Mr. Serling got there first.  His body of work contains many fine examples of how to be both clever and wise at the same time.
Posted by Jesse at 9:01 AM

Labels: Quotes, Television, What We Become