After being sent down to the minors to work on his swing, Ike Davis returned to the Mets roster last Friday.  Since then, he has proven himself a more disciplined and focused batter, consistently getting onto base and frequently driving runs in.  He's yet to blow one out of the park, but his increased comfort and ease at the plate inspire confidence.  It's a pleasure to see him back in the thick of things. 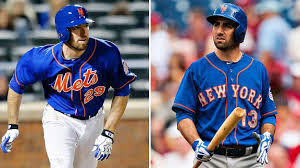 A shout out is also due to Josh Satin, the Mets' new number 13, who was called in to replace Ike during his absence.  Satin's performance has been nothing short of sterling, with a twelve-game hitting streak and a .362 batting average.  Though Ike Davis has returned, Satin remains in the roster and is being given opportunities to show off his impressive skills.  Here's hoping the both players have a long, bright future with the team.
Posted by Jesse at 9:01 AM