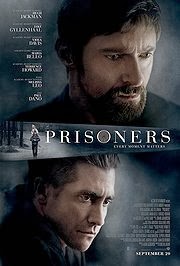 The movie Prisoners works extremely well on several levels, including as a well-crafted thriller and as a showcase for fine acting (Hugh Jackman's rage is powerful and disturbing, especially from such a likable and charismatic actor, and Jake Gyllenhaal creates a mainly opaque character and accomplishes the near impossible by also managing to make him sympathetic and compelling).  Most of all, though, Prisoners stands out because it offers a complex moral palette that you almost never find in mass entertainment any more and, what's more, it invites you to engage with it, it asks you to ask yourself some uncomfortable things.
The darker and more morally complex the actual world becomes, the more there is an urge for our entertainment to not make these kinds of demands of us.  But doesn't it seem like there would be great value in having a dialog with these issues in the safe context of fiction so that we can return to the real world better prepared?
Posted by Jesse at 9:01 AM