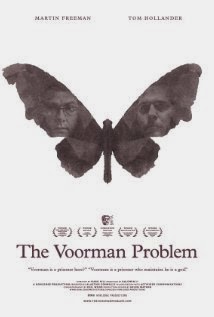 Every now and then, I (or any writer, I suppose) come across a story -- a book, a movie, a play, whatever -- that I feel like I should have written.  Not exactly that I wish I'd written it, but more that it reflects a theme and/or style so close to mine that it's like the actual writer just got to it a little bit before I would have.  I felt that way about the movie Unbreakable, for instance.
I've written a lot of short stories, very few of them published (yet).  One of those short stories that I would have written sooner or later has been made into a short film, one that was nominated for a 2013 Oscar Award.  It's called The Voorman Problem, and in it's twelve minute running time, it strikes all the best chords of weirdness and surrealism, and leaves behind a vast implication of cosmic terror.  Quite impressive all around, especially considering that it's a comedy (or so suggests the theme music).  It's available for download at all the usual places and well worth a twelve minute look.
Posted by Jesse at 9:01 AM