Being Creative in the Old Days 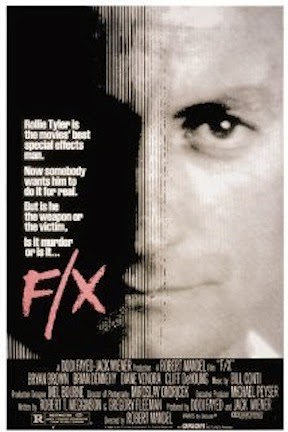 The movie F/X is about a special effects artist who is framed for a crime and uses his own particular genius to turn the tables on his enemies.  It might sound a little campy and there's no doubt that you have to accept its premise with belief well-suspended to fully embrace it, but it has everything you could ever want in a first-rate thriller: it's exciting, suspenseful, exceedingly clever, funny at just the right moments and is loaded with enjoyable characters and situations.  Featuring a number of top New York theater actors of the day in supporting roles, it also boasts unusually good acting (though Brian Dennehy as an acerbic and relentless cop steals the show).
The movie
With a (literally) striking homage to Three Days of the Condor and possibly the inspiration for the TV show MacGyver, F/X was made in 1986, before the art of special effects had all gone digital.  As a practitioner of purely practical effects, the protagonist uses nearly anything at hand to create illusions, sew chaos and generally misdirect his opponents.  Consequently, the movie stands as a paean to creativity through improvisation, craftsmanship and D.Y.I. skill-mastering
Posted by Jesse at 9:01 AM