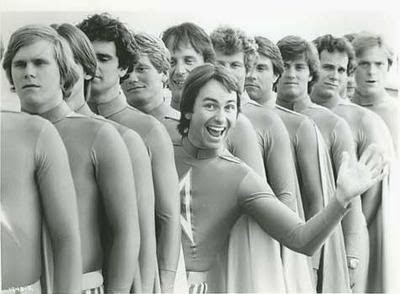 The much anticipated arrival of Avengers: Age of Ultron has put me in the mind of movies about heroes.  Hero at Large is a 1980 film that could not have been made today.  Struggling actor Steve Nichols (played by John Ritter) signs on to dress up as the comic book hero Captain Avenger and appear at movie theaters for the opening of the movie Captain Avenger.  On his way home, Steve stops in to his local deli for some milk and stumbles onto a robbery.  Still in his costume, Steve intervenes and sends the thieves scurrying.  Word of his deed spreads and New York starts wondering what this anonymous hero will do next.  Steve tries to live up to expectations, even as a PR genius employed by the mayor hatches his own plan for the flailing, would-be superhero.
Part drama, part comedy, part romance with a little crime and political intrigue thrown in for good measure, Hero at Large benefits from 1970s cinema's penchant for marrying a sense of realism and honest questioning of larger issues even to what is ostensibly a simple entertainment.  Released just a couple of years after Superman, it was solidly part of an era that still saw superheroes as simple (if not simple-minded) children's' fare and the Captain Avenger movie depicted within Hero at Large goes out of its way to evoke Adam West's campy turn on the late 1960s TV show Batman.
The current cinematic landscape is teeming with superheroes, or course, and yet their familiarity  robs the the idea of dressing up in an iconic costume of much of its power.  Somehow, with so many superheroes around, it's become harder to say something meaningful about heroism  But Hero at Large, stripped of fantasy elements, built unequivocally as a real world narrative, retains the power of its era and manages to ask more tangible questions about what a hero is than nearly anything available today.
Posted by Jesse at 9:01 AM