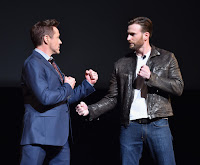 On a regular basis, I wax poetic about old Chris Evans and his interpretation of Captain America.  What is sometimes a thankless task of bringing the moral outlook of a bygone generation into the face of harder-edged modern day heroics still feels necessary, not only in terms of the character but also to carry a torch forward for generations experiencing these archetypes of Good for the first time.  And so . . .
In Avengers: Age of Ultron, we find Robert Downey Jr.'s Tony Stark at loggerheads with Evans's Steve Rogers once again, over Tony's penchant for making large scale (and dangerous) decisions (that often go disastrously wrong) on his own.  Tony defends his actions by talking about certain threats the Avengers will have to face.  "How were you planning to fight that?" he asks.  "Together," says Steve.  "We'll lose," counters Tony.  Steve's response: "Then we'll do that together, too."
There are some things more important than winning.  Lose track of who you are and what you've set out to do, as an individual or as a group, then winning the battle may not matter at all.