The Wisdom of Tony Banta 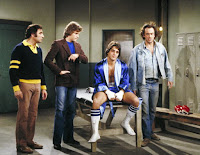 Watching my daughter's sometimes astounding, sometimes disappointing (to herself) performance in Little League puts me in the mind of the television show Taxi, surely TV's most melancholy sitcom.
In the episode "Out of Commission" Tony Danza's hard-luck boxer Tony Banta faces the revocation of his boxing license after one too many knockouts in a row.  When asked why he even wants to continue in such a brutal sport anyway, Tony responds "I can't say I've ever had a great fight.  Hell, I can't even say I've had a great round.  But there have been moments."  He recounts a particular combination of "left, right, left hook" that left the crowd speechless and made him the equivalent of any of the champion boxers who ever lived.  "I always thought that someday I'd put a few of those great moments together and have that great fight."
We build, little by little, in fits and starts, touching greatness and then seeing it recede, only to dive back into mediocrity knowing that next time, we have a chance of holding onto greatness just a little bit longer.  This applies to boxing, Little League, writing, and whatever else a human being might do to achieve something that resonates for everyone.
Posted by Jesse at 9:01 AM