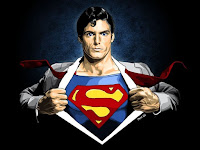 A one-day-belated birthday to the Man of Steel, whose first appearance in Action Comics 1, though cover-dated June, hit newsstands on April 18th, 1938.  Eighty years later to the day, Action Comics 1000 hit comic stores yesterday.  From two-fisted, tough talking champion of social justice, defender of the oppressed and scourge of corrupt politicians to iconic symbol of humanity's best values and hopes, Superman seems as necessary a symbol now as ever before.
An eightieth birthday makes a fine time to revisit, or experience for the first time, what makes the character great.  This New York Times article is quite helpful in that regard.
Not incidentally to all this, it's good to see that eighty years after their invention, superheroes are still leaders in a particular field of specialty: breaking down walls, in this country and all across the world.
Posted by Jesse at 9:01 AM