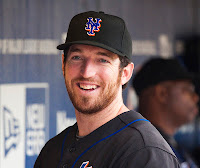 Athletes have long served as heroes and role models, usually on account of their skill and accomplishment on the field.  Ike Davis, First Baseman for the New York Mets, has been having an extremely hard time.  With only two hits in forty-four at bats, word of his demotion to the minors was starting to spread.  Nevertheless, according to his teammates, Ike never sank into despair in the dugout, always remaining a staunchly supportive of his fellow players, and spent hours after the game practicing, honing and experimenting with his swing.
After several hideous losses to the Atlanta Braves, Ike's hit drove home two runs in the ninth inning to win the final game in that series against the league's most powerful team.  A few nights later, his base hit brought in two runs to give his team an early lead against the Yankees (in a game the Mets eventually won).  Since then, Ike has had several solid at-bats, including a home run, against the Nationals.
So, not without effort and not without a fair amount of emotional and physical pain, Ike seems to be finding his way back.  He didn't give up and he never forgot that he was a member of a team, and that is as much a mark of heroism as skill and achievement any day.
Posted by Jesse at 9:01 AM