What Will the Force Awaken? 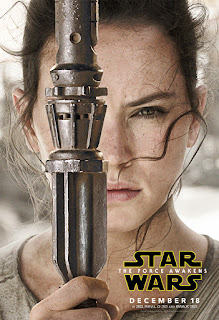 Pretty soon, Star Wars Episode VII: The Force Awakens will light up movie screens with new characters, new battles, new dangers, new models of lightsabers and a new path of destiny for the Skywalker clan.
Though the resonance of its narrative has mainly been attributed to mythology, Star Wars owes a great deal to the fairy tale: the clever farm boy who saves the day, the dashing rogue, the faithful animal companion, the sinister lord and, of course, the princess due for a rescue.  Princess Leia was delightful, to be sure, filled with pluck and competence that matched up to her male compatriots and then some.  But the movie that established the saga centered unsurprisingly on her rescue.  By the time we bid her farewell in Return of the Jedi, though her greater destiny as a Skywalker and a potential Jedi was revealed, we never really saw anything of it.  She was, in short, a girl in a world made for boys.
None of the promotional material for the Force Awakens shows Dasiy Ridley's Rey wielding a lightsaber, but J.J. Abrams has proved himself a wily showman who likes to keep tricks up his sleeve and he's proven himself a proud champion of female protagonists.  Is it too much to hope that Rey has a few lightsaber tricks and maybe even a familial revelation or two up her own sleeve?
As an author and a librarian who works to let children interpret and gain a deeper understanding of the world they live in through story, here's hoping that the Force Awakens helps blaze a new path of destiny for more than just Skywalkers.
Posted by Jesse at 9:01 AM