Ever had a moment, reading a book or watching a movie, when something that's lived in your imagination for years suddenly appears on the page or the screen, translated with perfect accuracy?  I saw Unknown this weekend and I can't say I was overwhelmed with it.  However, there is this one scene ...
Liam Neeson plays a scientist who returns to his wife after recuperating in the hospital to find that another man (Aidan Quinn) has replaced him.  His wife, his associates, everyone he knows now believes that this new man is him.  At one point, Neeson and Quinn are presenting their cases to an associate.  Neeson and Quinn begin describing portions of their history, details of their lives from childhood, intimate details that no one else could possibly know.  They start yelling, interrupting, talking over each other until both are yelling exactly the same thing at exactly the same time, much to the bafflement of both the associate and themselves. 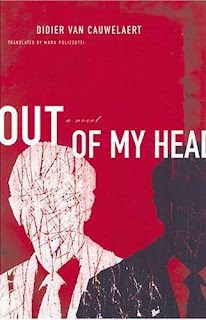 I've long been fascinated with the figure of the doppelganger and the idea that there could be another copy of a person that was so complete, so perfect, that they could, in essence, never have a conversation because they would always be saying the same thing at the same moment.  Seeing it played out in the theater gave me moment of bizarre disconnect, like something had been pulled directly out of my brain, and made for an astonishingly powerful moment in an otherwise mediocre film.
Incidentally, if the story of Unknown interests you at all, allow me to recommend the book it was based on Out of My Head by Didier van Cauwelaert, translated from the French.  The book is an existential thriller and, while it does follow the mystery of its character's predicament to a satisfying end, it dwells a good deal more than the film on the nature of identity itself.
Posted by Jesse at 9:51 AM